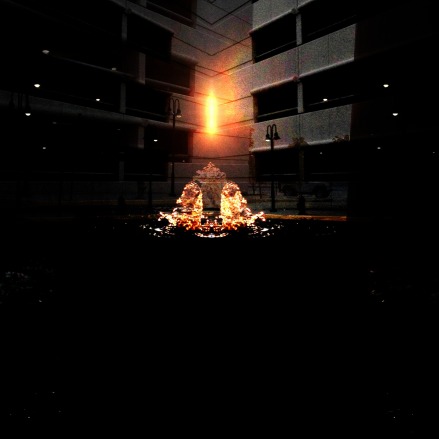 the hero anxious in the wings

a hushed sense of what’s next

a woman saves the day

the sun rises all is well

time  is small in my hand

I brandish my weapon

pen cuts through the marrow

Hours with sand and paint

The prompt this week at Poet’s United is Conquest (or Conqueror). The writer holds so much in her hand – the pen a mighty weapon. 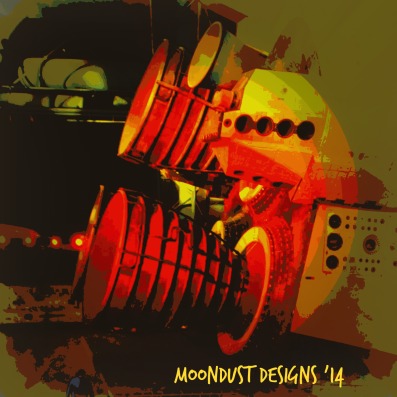 I packed my bags and my books

looking back my spaceship shook

all I need in my backpack

letting go of things behind

journey toward the edge of time

space was once the final frontier

but now its just a normal year

thrusters on toward dreams 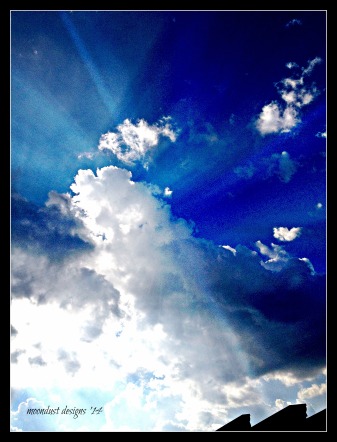 my eyes radiate your blue

tease us as you form animal shapes

elusive are your sweet offerings

What do you think of when you behold clouds?

Today’s One word prompt at WordPress  is Clouds

color in the memories

reality is so cold

helps lost to be found

color in the memories

no more black and white

I’ve worked with enough children who were abused, thrown away, tormented to candy coat pain. Children have an amazing resilience to pain perhaps it’s the imagination that can erase awful memories. Just think how wonderful those imaginations are without pain. 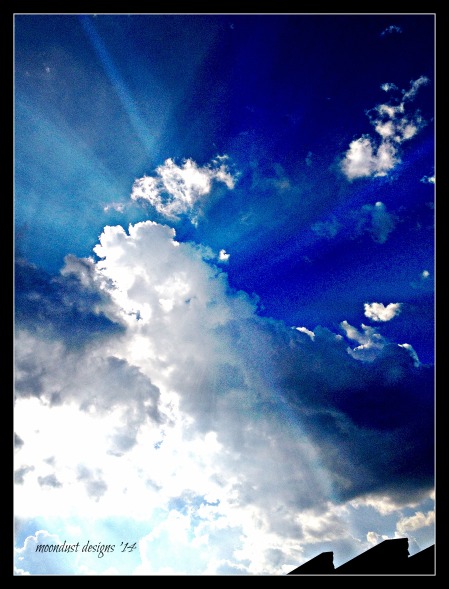 Fiddling with the superball in my pocket

wondering if it can touch the cloud overhead

I want to go the places it can reach

I want to soar high overhead

Listening to the footsteps in the plaza

a villanous plot from hundreds of years ago

hiding beneath my black cape

takes me places I wish to go

Backing up or going forward

so many things my imagination allows me to see

and all the while I am wondering

“Everything you can imagine is real” — Pablo Picasso

is the prompt today for A Prompt Each Day

Friday Feature is Back this Fall. Enjoy a month of Art!!! 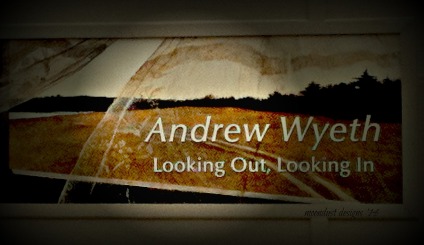 After enjoying the Andrew Wyeth exhibit at the National Gallery, I fell in love with this artist. As a student of art (and art history), I have been in love with Da Vinci, Michelangelo, Monet, Degas, and several locally renowned artists.

Why do we love art or their creators?

Well I can say with Monet it was because I would dream of the places he painted. Degas it was the people he caught midstream in their daily life. With Wyeth, I feel I have been in those  places (some painful) and written about them. In many of his paintings, though there is no human presence, you feel something or someone there. Wyeth  creates from  emotion: Sorrow, elation, discovery were as much a part of his palette as the paint was. In reading more about Wyeth and his upbringing ,I could relate in part to his way with art; he was very secretive about his work and kept others from seeing him working for fear of being disconcerted and putting the project away. Growing up as the artist’s daughter, I felt the same trepidation. I realize now that it may not have been the fear of disapproval as much as it was the inability to produce. For from the artist’s hand something must flow or life becomes like a polluted dammed up stream. I realize why I have an instinctive love for Wyeth – he had to find his own niche as an artist away from his famous father.

If you are familiar with his series of paintings Christina’s World than you also know that these paintings are inspired by a neighbor who had polio. His famous painting of her in the field is his depiction of her as she crawled in the field from one farm to the other. I am awed by his study of this woman. He gives a woman who lived her life in a wheelchair value during a time that such a woman would be easily overlooked (even degraded). 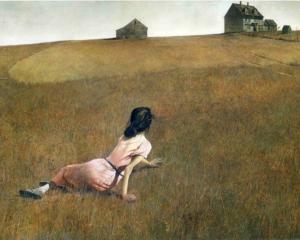 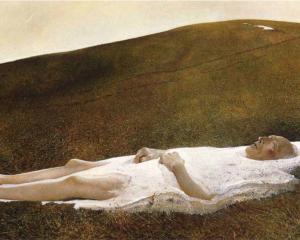 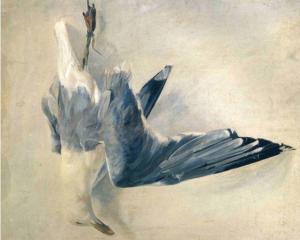 As I sat for hours looking at his work, I thought of Edgar Allen Poe’s writings where there are dark things hidden in the edges  of daylight. Wyeth’s angles remind me of the countless angles shot by Alfred Hitchcock – drawing the eye and imagination into a place they cannot escape. What lurks in Wyeth’s corners? What stories are left untold that can wander in our imagination weaving dark webs where retreat is impossible.

My artist mother has often conveyed that meaningful work comes out of trial, suffering, or hardship. For Wyeth it seemed pages of pastoral images fluttered forward: his father died and he entered a time where death emerged from his wheat fields. There seemed to be messengers speaking of death in his paintings. If I could interview Wyeth, I believe he would say that “growth of expression occurred.” An untested palette is just paint after all.

So I pose the question of the writer, the poet, the photographer: Has a difficulty or hardship caused your artistic expression to explode like the pine cone that sets forth its seeds of life during a consuming forest fire? Where/ when have you seen tremendous growth or change in your work?

Enjoy art for art’s sake and for the inspiration it offers.

“Never to suffer would never to have been blessed.”

Next week I have a special two part article of a french artist (Pierre Chalory) who painted 9/11. It’s been a delight to get to know this gifted artist. Check out Bold Magazine he is being featured in the September Issue!

All art work from WikiArt.Org WikiArt

It opened so many doors

skeletal though in shape

for a moment I escape

she had curly hair

she never got angry

well maybe once in a while

she gave me the key

it opened a world

the day that she left

I wanted to lock

now this hangs to remind

of the door to her heart

it never is closed

though we live far apart

The key above does in fact dangle off the handle off an antique. It originally opened the doors in my grandparent’s home.

My grandmother the queen of storytelling and opening the imagination of a small girl.

I also pulled this short story from my archives. This is the type story my grandmother would have told.

The boy’s hands had been frozen cold by the snow. He shivered wondering if he had the strength to return home. He looked at the key. So tiny yet full of life; he could feel it. As the gold key turned in the box, the key began to grow and glow. “I am warm,” the boy said in cheerful surprise.

The fire he had hoped for sprung up around the key, but the boy was brave and touched the fire without being burned. He now knew this was no common key.

Though many people in the presence of magic ask for something to ease their lot, the boy was content to hold the warm key and box. The box got heavier until the boy reluctantly set it down on the ground. He held fast to the curious box fearful it would vanish.

The box became hot as it ignited from the key’s glow. The boy continued to hold on tight. As the flame grew more intense, the box, which revealed itself to be pure gold, became clear like glass. The boy expectantly peered inside. The only thing he could see was a plain gold ring. He reached in through the fire, grasped the flame filled ring, and placed it on his finger.

An onlooker would have seen a most magnificent thing on that cold frosty morn. A key, a box, and a ring transformed a boy to a knight. The glow about him melted the snow. A kaleidoscope of color mingled with the fire,  flowers sprung from the impotent earth, fruit sprouted on nearby trees, and life that had so long ago departed returned to the barren land.

Little did this simple boy know that he was chosen by the key for a mission. The knight would save many downtrodden soul in the cold, unrelenting world and provide golden hope for the besieged. Long after the knight was gone stories would be told, through the land, of the knight who carried warmth for all in his heart.

The Golden Key by the Fairy Tale masters the Grimm Brothers is the preface to this story. 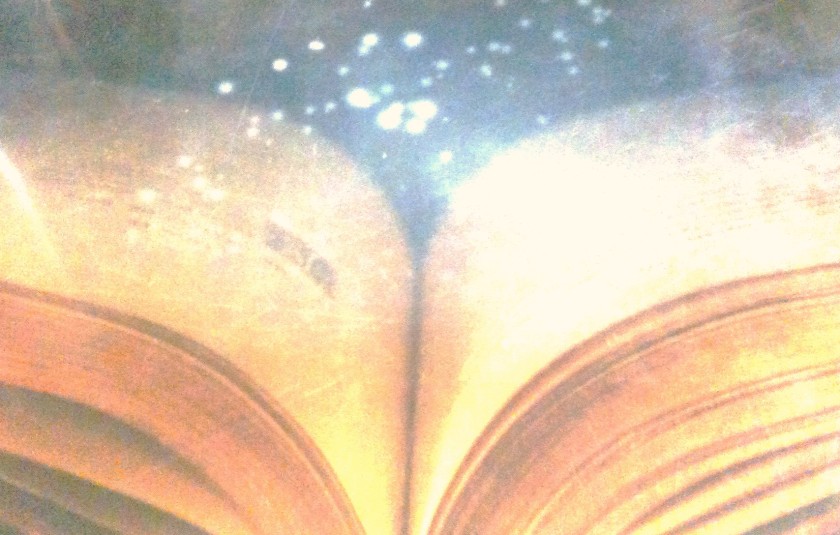 When as a child

where did dreams with you fly?

did you ride dragons

were you a double agent spy?

Did the Orient Express

carry you in style?

pondering life all the while

Did your nose always

where you followed wizards

hobbits with the name of Took?

Would you see the world

or march to a drum beat

did you faithfully stand

the smallest though very grand?

No matter the consonant

the dreams you dreamed

The life you lived

is who you’d be

The wordpress daily post writing prompt for today is Future’s Past.

As a kid, what did you want to be when you grew up? How close or far are you from that vision? 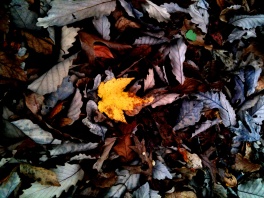 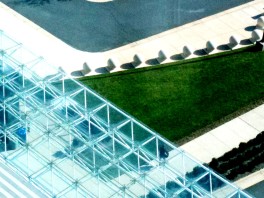 my words are captive

but did you know

reaching for the sky

in a watery world

today you are a mill

what the imagination finds

The photography challenge at Word Press this week is Layers. There were so many great opportunities to take pictures of layers this weekend – inside and outside.

And these are just a few photo layers for the week:

My senses tell me first

something fragrant is stirring

I try not to imagine what the neighbor is cooking

my salivary glands haven’t a care they’re not looking

carried away on a magic carpet

autumn colors of paprika and tumeric

my imagination is teased with the colorful display

a caravan from the east

great cooks of the world plan their feast

Putting my watering  mouth into check

my rolled carpet beneath one arm

a Merlot to wet our lips

I gather my glass, green salad and my wits

The prompt at Verse First today is to write about food. I hope you can smell the spices as they take an Eastern journey.

My Tweets
Join 4,421 other followers